Many of my art works are rooted in science with an affinity for outer space. In June 1969, as America fulfilled J. F. Kennedy’s dream to put the American Stars and Stripes into the dusty surface of the moon, my fascination with spaceships grew. As a child, I made spaceship models and always wanted to create my own space cities. Phantasmal spaceships carried me to unique wonderland of strange forms and colors. Eventually my artistic visions ended up on paper in some 500 drawings. As I got older, I wanted more flexibility so worked my way from paper to canvas and found and mixed media objects.

The Navigator is meant to be an extraterrestrial relic symbolizing flight and how to achieve it.

My technique creates a three-dimensional effect on any surface; it gives a sense of realism and presence to my work.

I’m a self taught artist, having earned my Bachelor of Science in Criminal Justice from the University of Phoenix. I joined the US Army in 1988 and was stationed in Frankfurt, Germany for a four-year tour of duty. My time in the Army gave my artistic endeavors a boost by meeting people from different backgrounds, living in a foreign country with a new and unique culture. This combination helped to take my work in a totally new direction, creating more open and honest art.

My first creative works started on paper, using four primary colors—blue, black, red and green. It took many years, and lots of encouragement from my wife, Christina, before I tried a more vibrant and varied palette. I also started experimenting with different materials—creating artworks on wood, using either acrylic or gluing ceramic on wood to form three-dimensional sculpture. The use of hot glue directly onto canvas happened by accident while gluing ceramic tile pieces on wood; it made for very interesting designs. My pieces also grew from works on paper to larger canvases and wood with my main emphasis on space and the universe.

Klee and Chagall are in my cadre of artists whom I admire and emulate. Flag Three, above, was inspired by Jasper Johns.

I refer to my work as Definism, an optical, artistic illusion which portrays various differences in human nature—from life’s everyday dramas to the human quest to understanding ourselves. I want my art-works to transport viewers from the daily doldrums to a visual interpretation of an alternative non-reality. Definism creates imaginary portraits, places and imagery that cannot be found in the world but still looks so real when it appears on the canvas.

Many scientists—including Nick Bostrom author of Superintelligence: Paths, Dangers, Strategies—believe we live in a computer-generated simulation world. Parallel worlds exist meaning that many versions of a person can exist simultaneously in different circumstances. Using my own interpretation, I attempt to create what I’ve learned about our world and reflect that knowledge on paper or canvas.

Here, in 2014, my work was digitally superimposed on the W building in Times Square, New York. This was a three-day, group event sponsored by SeeMe, an American arts-sharing organization.The image is a pen and Ink drawing employing Definism as defined in Art Radio:

“Art transcends consumerism; it asks and demands more of its participants. 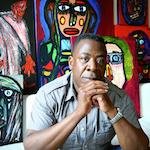 Born March 25,1964 in Brooklyn New York, Darrell Urban Black is an American visual artist presently living in Frankfurt, Germany. His work has been published in some thirty magazines and journals, among them Burningwood, Lunch ticket, Art hive, Arteries Interview and artqol. He has shown in over 200 exhibits—from the Kennedy Center in Washington D.C. to Art Basel Week, Art Miami, the Louvre Museum, Paris, the Library of the Stedelijk van Abbemuseum, Netherlands and the Celebration of Queen Elizabeth II Diamond Jubilee Corinium Museum Gloucestershire UK. Click here to see more of Black’s work.