I have no idea where the images in my poems lived before they made it to the page. I’ve received ample chiding during poetry critiques on my tendency to “raid the unconscious.” Sometimes an image is found just by walking out into the world and finding an object with an emotional or psychological correlate. Other times, the image surfaces through a bedrock of shared human experience. Hard to trace.

Around the turn of the twentieth century there was an interesting shift in poetry that involved imagery. The Imagist movement originated as a turn away from Victorian poetry into an emphasis on concrete images with no wasted words. Ezra Pound originated this movement which encompasses poets such as William Carlos Williams and Amy Lowell. Pound’s famous two line poem In a Station of the Metro epitomizes this:

The apparition of these faces in a crowd:
Petals on a wet, black bough.

As a side note, the Imagist movement occurred during the same general time period that Carl Jung was advancing his theories on human archetypal images and the collective unconscious. It is fascinating to consider how psychological theories may have intersected with Pound’s movement.

I recently found an imagic powerhouse of a poem on Tracy K. Smith’s website The Slowdown. The poem, written by Karina Borowicz, contains imagery that drew me into the poem through four readings before I paused for breath:

There was another country
always spoken of
with reverence.
I didn’t understand
why we’d left. I didn’t yet
understand the saw blade
of history. I was nourished
by nostalgia for a place
I couldn’t remember.
Wasn’t there a great forest,
a bison that would lap
milk from my hand?
The scrape of that secret
dark tongue.
A woodsman’s cottage,
shelves lined with carved
and painted birds.
Our fireplace was where
the stories were read
from a burning book.
Molten logs, lit from within:
See the shadow of a man
in there. See a terrifying
creature with wings.
See it all fall down.

Wow. Why do we love one poem, another not so much? I can’t tell you why with any certitude but I think it has to do with the mysterious work of images. This poem strikes a chord with its blurred references to old places and extinct creatures, unseen ancestors, rooms we have never visited. And yet there seems inside us, a recognition of these images. Call it déjà vu, a sixth sense, or a Jungian archetypal encounter. Call it a storehouse of shared psychological patterns:

Images that travel and speak to us through a mysterious filament of ancestral and archetypal memory. Way on down through time. 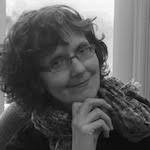 Sharon Ackerman holds an M.Ed from the University of Virginia and is a poetry editor for Streetlight Magazine. Her poems have appeared or are forthcoming in the Atlanta Review, Streetlight Magazine, Northern Virginia Review, and Heartwood. She is the winner of the Hippocrates Poetry in Medicine international contest, London 2019.