I’m dreaming. I am in my old life, the life that no longer exists. I am married and I have a daughter, although in the dream she is young and not an adult. And things are going wrong. We are in the midst of a large group of scientists and my husband is ignoring me. Worse yet, he is oblivious to me; he’s discussing a travel adventure with an Italian and a Swiss scientist – they are going to fly above the Alps in a hot air balloon. And he is taking my daughter, a mere six-year-old, along. I have a terrible premonition of disaster: something will happen and I will lose them. And I am shouting, shouting at my husband to stop but I cannot hear a single sound coming out of my mouth. Now I am screaming at the top of my voice. Nothing. My whole body is contorted in the effort to scream. But I cannot utter a single sound, let alone the scream that fills my chest to the point of bursting. I am voiceless.

I wake up in a cold sweat, terrified, and breathe slowly to calm myself, my mind still on the vivid details of my harrowing dream.

I have come to dread my nights. I’ve had nightmares before: falling from great heights, drowning in swelling water, and freezing in my tracks in the face of imminent danger. But dreaming about being voiceless is the most painful dream that I’ve had so far.

Night has set in Bessay, and I am dreaming again. I find myself in a land that I do not recognize. The strangers around me are speaking singsong Portuguese, and I think that, perhaps, I am in Brazil. And there is Dan, my husband, again, with his arm around the shoulders of my six-year-old. We are in a large auditorium and he is addressing the audience in fluent Portuguese. My little girl sits in the front row. I am all the way in the back, next to the emergency doors. Every so often, Dan glances in her direction with a smile on his face, and winks. I know—even though I don’t speak the language—that he is telling the audience that this is his daughter, sitting right there up in front. And then my dream changes course abruptly, as dreams are wont to do. We are at Elk Falls National Park near Vancouver. Cleaving the forested park in two is a deep ravine, with a suspension bridge stretching perilously between the two sides. There are masses of people swarming around. The flimsy bridge is packed with adults and children crossing or pausing to stare at the waterfalls cascading down the ravine, hundreds of meters below. My husband and daughter cross it in an instant. I follow and freeze. I have taken all of three steps. A feeling of terror sweeps over me when I see the endless depths beneath me. I cannot move forward but I cannot go back. I cannot take the three steps back to safety. And I scream. I am screaming out to my husband to help me. I am screaming at the top of my voice to anyone to help me. But all I hear is a gurgling sound coming out of my mouth. My whole body has twisted itself in an effort to give voice to the silent scream. And then, swaying there in terror, I realize that I am mute. I am a mute; I have always been mute. I have never uttered a sound, let alone a word or sentence, in my entire life.

And with that soundless howl I wake up.

I want to speak. I have so much to say – so much catching up on to do. A whole lifetime of silence: I want to give voice to that life. I want someone out there to hear me, someone to listen to me.

I stand in front of my mirror and pretend to speak, imitating the facial expressions of speech. I am mimicking actual speech. My reflection is grotesque, but I keep on going. I practice and practice. I am determined to make myself heard at this late age, before I die. And it is so odd, this condition of selective mutism I suffer from, because I “speak” four languages: English, French, German, and Serbian. I can read books and watch movies in the four languages I acquired as my family moved from one country to another. But I never spoke. My parents gave up on me long ago, when I was just a child. I was sent to special schools. No one could do anything to improve my condition, and so my parents desisted from further efforts. I became sort of an appendage in the family, pushed aside as somewhat of an embarrassment, the way many families try to hide a child suffering from physical or mental handicaps.

I go to bed early, exhausted by my mimicking efforts, dreading the nightmare that lies ahead. And I am on the suspension bridge again. I know the dreadful sequence of events that lies ahead: the fear of heights and the silent scream to come. And as I take the three steps into groundlessness, I think: I cannot bear this anymore. I slip under the loose mesh of the handrails and jump. I am plunging through the vast expanse of nothingness, down, down, down into the bottomless ravine. My movements are graceful, like the movements of a ballet dancer. I twirl and swoop down, and then I glide back upward through the ethereal expanse like a bird in flight. All is lightness and grace. And I am not screaming. This time I am singing – singing at the top of my voice, my voice light and mellow, flowing from the very pit of my being. And I am singing my life into song. 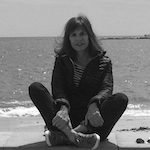 A Ph.D. in Slavic Languages and Literature, Anita Lekic taught at the State University of New York at Stony Brook as an adjunct professor and later moved to The Hague to work as a translator for the UN War Crimes Tribunal. Her fiction publications include Nothing Broken in Streetlight Magazine, Dying in The Hague in The Dark Ink Press and Siblings in The Bangalore Review. She lives in Portugal.