—for Nicole Marie
She asked me to stand by her side,
But I wanted to see it all
Because I knew that I’d forget—
Even as hard as I’d want to remember—
The brunt and the bitter
Forcing my son into the world.
My curiosity was stronger than her contractions,
Looking at my son’s soft skull—
Draped in silty, mousy-brown hairs—
Swirling inside of her
As an eyeball blinking her lips
Open and shut and open again
For the first time
Not quite ready to see
Who was waiting for him
This side of his mother.
I had never seen her so vulnerable,
Depleted, her baby at the cusp of life,
Yet lodged so inconceivably deep,
Nearly impossible to push out
In spite of all her might,
All the night without peace,
What little time had passed between breaths,
And was yet to come in the immediate unknown.
We were approaching a forest
Where the air was rarefied,
Our vows ratified,
And we held our breath
And pushed, each time more unbearable
Her legs wide as hours spread by the second,
His unheard cries just a few minutes away
From never, from disbelief.
A constellation of nurses
Descended from every corner
Of the hospital and hovered over
Her pain, nausea and my sobbing
As angels over a Petri dish of strange,
Single-souled bacteria reproducing before their eyes.
The waft of her sweet iced breath, urine ammonia,
And pungent waste rushing out of anywhere it could,
Reminded me that a relationship
Was a scrapbook of hardships
Collected, cut and pasted
Onto pages flipped years later
To relive the momentary happiness
You missed while you were busy
Looking on the road for the right things;
The path to our new home
Revealed itself as the doctor
Accidentally flicked the thick,
Uterine blood onto my sweat rancid shirt.
Although the doctor sutured her tears,
Taking her time to reshape
The gateway to pleasure and life—
That which was no longer what it was
And what it never would be again—
As Michelangelo chiseled David’s buttocks
To approximate a perfection never seen before;
I was left with a gaping hole in my chest,
One that saturated itself full with healing
When his warm defenselessness lay on mine:
All the wounds they closed on her opened in me,
All the things they took out of her were placed in me.
She lay defeated,
Deflated, our child—
Our blood swaddled in her blood—
Beat on her engorged, leaking chest
Like a heart outside the body;
That thing she’d love like nothing before,

A love that would end up killing her.< 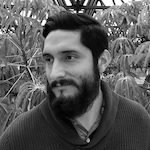 Jose Oseguera’s writing has been featured in The Esthetic Apostle, McNeese Review, and The Main Street Rag. His work has also been nominated for the Best of the Net award (2018 and 2019) and the Pushcart Prize. He is the author of the forthcoming poetry collection The Milk of Your Blood.