The city of my birth, as seen from above, is a ragged landscape of canyons. Highrises, lowrises, the steeple of an old brick church. Streams of yellow taxicabs where forests of hickory and chestnut once grew. To the north lies the green rectangle of Central Park, the woody heart of this metropolis. There, red-tailed hawks and peregrine falcons prey on pigeons and squirrels and sometimes an errant Chihuahua. To the west, across the Hudson River, the fair state of New Jersey. To the east the bridges that stitch the island of Manhattan to the boroughs of Queens and Brooklyn. To the south Lady Liberty stands alone on her rock, torch aloft, hopeful and welcoming at the mouth of New York harbor. And there at the bottom of Manhattan, where long-ago woodlands gave way to Wall Street, it’s impossible not to notice a gap in the skyline, an emptiness that causes a feeling of vulnerability, a shudder, especially in the month of September.

My brother David and I paid twenty dollars apiece to stand on the observation deck of the Empire State Building, eighty-six stories high. It was a first for both of us, though we were born and raised in New York City. Two pigeons rested on the ledge outside the guardrail that keeps visitors from falling—or jumping—to their deaths. I had no idea pigeons could fly so high. How did they get up there? Maybe there was a local flock whose members had never touched the ground. The wind was cold as I walked twice around the deck, taking in the amazing sight of all those people pressed up against the railing or smiling for photographs—all of them, every one of them, there to gape in awe at a city, a landscape, an organism I had never ever gaped at, never even grown fond of. I had only taken it for granted and run far away when I could.

At that height the sounds of the city were low and indistinct, a faint hum, like the whirr of a distant fan. But close around me the chilly air was filled with the sounds of excited conversations, dozens of foreign languages spoken rapidly and with much nodding of heads. The inability to decipher another person’s words is one of my favorite parts of travel. Knowing that that tangle of sounds and syllables means something to someone else—it makes me feel larger than I am. As a kid I thought if I just relaxed my brain enough I could do it, I could understand a joke in Urdu or a curse in Norwegian. I still wish for an ear that understands every language in the world. Every birthday, blowing the candles out, that’s what I wish for.

David and I left our aerie and dropped down to the street where the city greeted us in a different way. The honking, shouting, subway-rumbling way I have long been accustomed to. We decided to walk to Brooklyn and we headed downtown, stopping in every bakery along the way to satisfy my skinny brother’s preoccupation with pastries. We crossed the Williamsburg Bridge, one mile long and painted an unpleasant pink. At the end of it we turned a corner and found ourselves in a different century, and on a different continent. Nineteenth-century Europe bustled around us. Men and boys in black flat-topped hats, wearing long black coats and trousers, hair cut short but for two sideburns left long and curly as dreadlocks. The older boys with the beginnings of beards and all the older men bearded, some with a dark or white fan of frizzy hair spread across their chests. Young wives with headscarves and beautiful dark shiny shoulder-length hair, pushing strollers, two or three or more children in tow. The older women with full head coverings. Dresses gray or black, long-sleeved, worn well below the knee. Eyes averted as we passed in our blue jeans and shorts, for this was a neighborhood of Hasidim—Hasidic or Orthodox Jews. Many boys and men with eyeglasses. Hebrew lettering on the school buses. More beautiful shiny shoulder-length hair worn in the same style by every young wife. Not an adolescent girl in sight, though teenage boys were present on the streets, in knots of friends or walking alone, looking inward or down. Not a word of English heard. Yiddish and Hebrew, and something that might have been Bulgarian or Czech. David asked me as we walked, “Have you ever looked at our own neighborhood this way?”

“With the open eyes of a traveler?”

More bakeries. One woman after another putting pastries in our bag. The beautiful hair of the younger women remained a shining memory after we learned the secret of the uniformity of color and style. The custom among Hasidim women is to cut off their hair and don wigs. Wigs for the world outside. “A good business in Brooklyn,” I said to my brother. 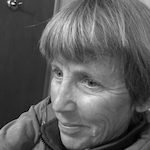 Margaret Erhart’s work has appeared in The New York Times, Christian Science Monitor, and The Best American Spiritual Writing 2005. Her commentaries have aired on NPR. She won the Milkweed National Fiction Prize and was a finalist for an Amazon Breakthrough Novel Award. She lives and works in Flagstaff, Arizona. You can find her at www.margareterhart.com.