The plant in the corner needs to be watered. It’s staring at Anita again. A cold deadpan interspersed with the occasional slow blink. The plant doesn’t have a mouth but if it did she imagines that it would yell a lot. It’s a small succulent, (Echeveria Colorata- She liked that it had color in its name) that Anita bought from Wal-mart the first week of classes as an experiment in caring for a living thing.

“You should get a fish. Or you know maybe start out small–a plant? It’s good to care for something other than yourself,” a friend suggested once after listening to Anita’s ongoing battle with companionship—a half-assed attempt to assuage the pity boiling in her gut.

Anita lives with roommates. Three of them. Two fellow students and one thirty-something agoraphobic. They don’t speak; instead choosing to write reminders on color coordinated post-its.

“Hey guys—SOMEBODY let this bowl in the sink soak a liiiiiitle too long last night. I had guests over. It was embarrassing.”

“TAKE GARBAGE OUT. Shit’s getting dank.”

“Could you listen to your music a bit quieter next time Anita? Some of us are trying to keep their honors.”

She finds herself in front of their respective doors frequently, hand poised, ready to knock. The huff and self-deprecation that come with no follow through are, of course, inevitable.

Anita can at least say she has her plant. The other three live alone. Anita doesn’t live alone she proudly thinks, but the plant must hear her thoughts because it raises one eye mockingly.

Anita’s parents worry. Her mom calls to talk about her love life, “but honey you deserve someone special!” Anita wants to argue that not having a partner isn’t a problem. What comes out is “Mom I have a plant. We’ve come up with a system. After one blink I water it. Seven means to shut the blinds, and three means to turn my music down. I have high hopes.” She hears her mother burst into sobs as her father’s muffled voice commends her dedication to her studies. The world needs more people like Anita.

The days grow shorter and colder and Anita can’t distinguish one week from another. She sleeps and sleeps while her classes seem harder than they once were.

The plant doesn’t blink as often as it used to, and it’s freaking Anita out. She looks online for succulent care guides and chats. She goes to the library and checks out plant books. “Excuse me, do you have a plant? What do you do when it stops blinking?” She asks the woman at the information desk because she’s more than a little desperate. “I wouldn’t know dear. My plant doesn’t have eyes.”

Anita sits on a bare strip of carpet in her tiny room flanked by ever growing mounds of clothing. The plant has taken to sleeping more and more. Anita tries to talk to it. Maybe it’s lonely? “Hey little guy. Are you okay? Is there something you need that I’m not giving you? Blink once for yes and twice for no.” The plant slumbers on.

The succulent is turning colors and Anita is skipping classes. She’s trying different water mixtures. Her grandmother is a master gardener and is pretty baffled. All her grandma’s plants try and give advice into the phone while she’s talking. She could always grow such talkative plants.

The smell is a problem. She notices the dark brown patches on the tiny pedal like protrusions. Her roommates notice as well. Perhaps she should reexamine water versus sunlight ratios again. Her notebook is full of tweaks.

“What the literal FUCK is that smell?”

“While I am pleased you may be taking an anatomy class of some sort—it’s not appropriate to bring our subjects home with us.”

Anita can’t miss any more classes, so she leaves the last possible morning without expulsion with a sense of foreboding. When she comes back the succulent is dead. It’s a gruesome death; it’s sunk in and has the consistency of ash and is completely brown. It droops and smells like her freshman biology failure with earthworms.

Anita gags and the smell of rotting organic material invades her nostrils. Her mug drops. Rotting flesh. Why does it smell like rotting flesh? She bends down without thought and picks up the pieces while her eyes un-focus and well. Her fists clench; the porcelain edges feel good digging into her palm.

She has to get rid of it. She takes it, the elaborate pot she purchased, and her bloody porcelain shards to the dumpster in the back of the complex. She knows that it deserves a better resting place but she doesn’t know where. It just hung out in her room its entire life.

It occurs to Anita that she never named it. Her room feels dangerous without the plant. So does life. 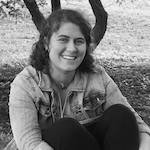 Ali Curtis is a writer, artist, and professional key searcher based in Fort Wayne Indiana where she is surrounded by friends and family. This is her first publication. You can follow her on Twitter: @AliJWrites and Instagram: seealipaint.