I’m drawn to the wild juxtapositions that collage creates. I love the idea that anyone armed only with scissors and glue can construct an image that’s as fresh as a dream and just as startling. Also, I’m attracted to those images that are hypnotic and hallucinatory; the ones that are striking, irresistible, kinky, and unforgettable. One aspect of nature that is especially interesting to me is sexuality in all its complexity and manifestations. Therefore, many of my collages deal with the embodiments of desire, the markers of attraction, and the sacred delirium of love.

I started tinkering with collage back around 1979. I’d already been writing and publishing poetry for about ten years. I founded The Somniloquest’s Press, and I published a surrealist magazine, Dream Helmet, as well as some chapbooks and broadsides. Just at that time, I was introduced to the English surrealist poet and collage artist John Digby. John became my mentor in all things surreal. John did the collages for my first book of poetry, Pale As an Explosion.

I first understood the delight of illusionist art by looking closely at Giuseppe Arcimboldo’s painting Autumn. I still love his portraits made from many materials. His influence is recognizable in my attempt to reimagine the human face. One of my early mentors, Bill Wolf, was a friend since high school; he had studied photography with Philippe Halsman. Bill taught me about light and the clarity of the image. Later, John Digby encouraged me to experiment with the scissors and paste of collage. I was also influenced by the poet/photographers Ira Cohen and Charles Henry Ford.

I was attracted to surrealist collage when I first came across it in high school. I was especially fascinated by Max Ernst’s collage novel Une Semaine De Bonté. Later, I discovered an early book by Ted Joans in which he made collages out of medical prints. But it was not until I was introduced to John Digby’s collages that the possibility of making collages myself opened up, and because of his help, advice, and support, I was able to make progress with collage. So I first started working seriously on collage when I was assembling my surrealist magazine, Dream Helmet. I decided to attempt to make collages for the page numbers.

To begin a piece, I select some sources—either color or black and white. If I’m using magazines, prints or old books, I cut out images or parts of images that interest me. Then I start working on a background or other sort of chance construction. Much is left to fleeting insights, tiny miracles of inspiration.

Depending on whether I’m using scissors and glue or digital images, each collage could take several hours, days or even weeks. So I allow each piece some time to settle. I begin by asking myself, “How can I simplify this image?” “Why should anyone be interested in this image?”  Such questions help me to hear my “bullshit detector” which saves me from excessive sentimentality, pseudo-profundity, outright imitation and repetition. Once a work has a title, it has passed scrutiny and is ready for the world. These days, I return to a variety of materials for constructing collages such as flowers, birds, machines, landscapes, and hair

Many years ago, I sent some collages to a magazine and they were rejected. However, the editor asked if I had anything that would fit the upcoming theme of “automatons.” The editor’s request pushed me to explore new territory. After making a few mechanical collages, which I now refer to fondly as “Wobots (Wolak + robot),” I really enjoyed these types of constructions. They connected me with the sense of wonder and awe that I experienced playing with some of my early toys—robots like Mr. Machine, Robby the Robot, and Robot Commando. The science fiction robots of the movies, comic books, and television fascinated me as a child. This sense of wonder and awe was different than the feeling of seductiveness or beauty that I was attempting in my other collages constructed of flowers, feathers, hair or landscapes.

Soon another feeling crept into the construction of the Wobots: dread. They started to appear dangerous, as if they were constructed to intimidate and evoke fear. The dangerous aspects of my Wobots can be seen in the scary exteriors. They have arms that can crush or pierce and kill, they are constructed of metal and glass. My robots are not in any way meant to blend in with humans or to take on a human looking exterior. My robots are always “other.” Their intimidating exteriors should make the viewer question why they have been constructed and what happens if they do go out of control. There is nothing reassuring about them, they exist for some ominous purpose.

For the most part, my Wobots feature machinery as the exoskeleton of the AI contained within. There is no attempt to soften their artificialness with anthropomorphic shaping. Rather, they tend to be more fashioned toward the zoomorphic. They appear like insects representing a hive mentality as opposed to human individuality. It’s no accident that drones all resemble insects instead of angels. There’s a similar story for each different type of collage. Constant experimentation leads to new combinations.

Now I’m working a variety of new kinds of collage, especially ones constructed out of hair.One can only hope for the enchantment of the unexpected. One must remain alert and open to the infinite possibilities of artistic expression. Sometimes the secret is revealed in the object itself by observing closely; other times, it might be the juxtaposition of objects that resonates. Also, the introduction of chance operations into any established field of artistic routine helps to keep the process fresh. 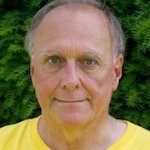