69 Killed on Eastern Jet in a Crash near Charlotte
New York Times,September 12, 1974
Like Odysseus, you sail the ocean in howling winds.
No arm chair academic in corduroys,
you are my red-bearded oceanographer in foul weather neoprene.
Like Odysseus, challenged by Poseidon, far from the home fires of Ithaca,
you, too, are tempted to taste the water nymph’s petals, but unlike Odysseus,
you do not fall out, drugged and dreaming.
Like Penelope with sulking Telemachus, I have little ones and sick patients.
But, I have no need to pass the shuttle.
No need for loom as ruse, I am on first call.
Like Odysseus, you hear the sirens singing each to each,
accept a bag of wind from Aeolus, avoid the dangers of Charybdis and Scylla,
and resist Circe’s charms.
Unlike Odysseus questioning Penelope’s state of chastity,
you do not inquire of Calypso about mine.
I have no wine swilling suitors milling around my hearth.
Like the old hound pining for Odysseus, the Great Danes keen for you.
You are not ten years away; my wait is weeks.
Like Odysseus, you escape Poseidon and are on your way home.
You exhibit no hubris like Icarus flying in feathers and wax.
But, you too fall out of the sky in flames.
Not into the ocean, but into a cornfield outside Charlotte.

Unlike Odysseus, you never make it home. 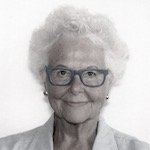 Sharon L. Hostler is a retired pediatrician, Emerita Birdsong Professor of Pediatrics at the University of Virginia. Dr. Hostler’s work has been published by Pharos, the Permanente Journal, Hospital Drive and the Giant Squid. An essay, Malaysia Air #370 Crash, was published in the May 11, 2014 edition of the Richmond Times relating to the Eastern Airline crash in 1974, the topic of the submitted poem. Two poems have been accepted for publication as part of an Anthology of Woman Physician Writers, edited by Eliza Chin.