To me, being alive means dealing with one challenge after another—some glorious, others not so much. My current, decidedly inglorious challenge is having chemotherapy for metastatic cancer. I think of chemo as Paleolithic, micro-inch cavepeople marching around my cancerous body, brandishing clubs and whacking every cell in sight. There’s one! Healthy? Malignant? Who cares? Whack!

Among the whacked healthy cells were the ones that hold onto hair. After the first chemo session, I went from having what one friend described as “long hippy hair” to being all-but-bald. So being who I am—a determined realist—I shaved my head in order to prevent the rest of my molting hair from clogging up the bathtub drain.

Professionally, I am a writer, long-time journalist and an essayist (NPR.org, The New York Times Magazine, Washington Post, and Streetlight! among others). And surprise! surprise!—thanks to St, Martin’s Press—I became a novelist at the age of sixty-seven. As life is change, however, the cancer experience has started me writing what I call poessays—bits of myself on the page that I think of as tiny essays in the shape of poems.

I write them mostly just to write them, but occasionally I’ll let one loose. And there’s something about coming out openly as hairless that has moved me to go public.

It’s interesting being a bald-headed woman.
Bald-headed men, they’re a dime a dozen,
But a bald-headed woman always rates a second glance.
What is the matter with her?
Is she ill? And
If so, is it catching?
Why doesn’t she cover her baldness
With a wig or a hat or a scarf?
Is she making a statement?

Well,
This particular bald-headed woman is making a statement,
And that statement is:
I have cancer,
And I see no reason to pretend otherwise
To either you or myself.

The way I see it, my life is my adventure, I’m the only one who gets to have it, and I will do my best not to shy away from the richness of the experience. It has always been important to me to be in the world as the woman I really am—proudly and openly wearing the marks of time and experience.  And these days, of cancer.

In the interest of full-disclosure, I feel obligated to point out that my husband, Obi-Wan Charlie, is quick to point out that everybody is not like me when it comes to dealing with life’s ups and downs. To which—in this case, at least—I feel entitled to retort: That, Charlie Dear, is my point. . . 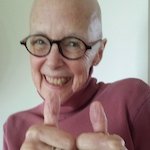 My first job was as a teacher’s aide in a pilot Head Start program in Greensboro, North Carolina. . .

Since then (among other things), I’ve co-owned three C’ville restaurants, hosted TV talk shows, been fired as editor of Albemarle Magazine, freelanced a lot for NPR, published a book on the 12 Steps, cooked for an artist’s colony, run a railroad crew hotel, been a country music disc jockey and a psychiatric occupational therapy aide, taught preschool, published miscellaneous essays in various places (among them NPR.org, NYTimes, WashPost, Chicago Trib and Streelight), been a morning drive-time personality on a tiny AM radio station, operated a bookstore coffee shop, worked in college administration, and failed to sell cars.

I was proudly and happily attached in various on-air capacities to WMRA Public Radio for fifteen years.