I’m a Los Angeles-based conceptual artist and painter. I was born in Jerusalem, Israel. Although my parents did not have any special interest in the arts and never painted, I started painting in childhood, wandering away in my mind, mostly in school while the teacher was talking. Being an athlete was much cooler than being an artist so I didn’t show my work much.

I stopped painting when I enlisted in 2000 in the Israeli army which is mandatory. After four and a half years in the army, I traveled to South America for a year and started painting again; I was then already in my early twenties. One of the first things I did was a mural in Buenos Aires, and the creative hunger hasn’t stopped since. I love using oil paint.

Later I wanted to share with the world the odd “reality” for Israeli children so I painted a memory of one of my experiences during the Gulf War. I was about eight years old and I was very frightened; the alarm would go off and our family would huddle into a room for about an hour with gas masks on our faces. I find it sad that it was just the first in many terror waves I would live through. Although the year was 1990, the theme is still very much relevant to the world we live in today. It seems surreal to think about it with the “American” mindset I now have, but this is a collective memory of all Israeli children growing up in the ’90s.

I passionately search for the unexplored, the often not portrayed and interesting side of the persona I paint. I create portraits of people I’ve met throughout my creative journey, people who impacted my life and art. I live for the process and the complete painting is only the last step in the artistic method.

I spend weeks at a time with my anonymous or famous subjects, photographing and emerging into their lives, getting inspired by their habits, beliefs and family. The more time I spend with my inspirations the better the work is on the canvas. The goal is not only to create a visually pleasing and highly detailed portrait, but also to tell a story and document a moment in time that makes the viewer feel something. First I photograph the subject, using it as a reference and then I start the initial pencil drawing. The next step is mixing the colors and applying the oil paints to express my point of view.

My style has changed a few times over the years. It keeps evolving to this day and I believe a good artist never “settles” and keeps moving forward and redefining himself. I admire the work of David LaChapelle, Rembrandt, Warhol, Dali and Gottfried Helnwein.

I like working on large canvas. I like everything to be large in my life…if I’m doing something I’m doing it big. I like contrasts and I like making a statement of my views through my art; it’s my language, and I feel that only through my art I can fully express myself. The pieces are incomplete like me: a constant work in progress, never finished until the day I’m gone.

Alon Abutbul is an Israeli actor working in Hollywood. He won the IFFI award for best actor in India’s forty-fourth international film festival and starred in the Dark Knight Rises. Alon opened my eyes to search for more than just what meets the eye. I feel very connected and inspired by Alon and his artistic approach to his profession. I consider him my philosophic mentor.

Joshua Hopkins came up to me at a party, without ever seeing each other before, and told me that he felt like he knew me. What connected us initially was our stress; Joshua has PTSD from his time and injury in Iraq and I suffer from anxiety attacks. Joshua healed himself through fitness. He started helping others and now is a fitness influencer and a celebrities’ coach. He showed me ways to overcome my anxiety and deal with it in a positive way. I decided to create a portrait of Joshua ripping the rope around him like he did in his life; he doesn’t let any limitations stop him in fulfilling who he can be.

When I met legendary Israeli musician Fortis, he shared the fact that he had a stroke and fell into a coma. When he woke up, he told the doctors that he met two fairies who brought him back to life and enlightened him on a new way to live from that point on. Fortis then recorded an album and called it Fairy Section. I decided to create a portrait of him with the fairies. I used Origami to create the fairies and then I painted them onto the canvas, wanting them to look exactly the way he remembered them

Ninet is an Israeli musician who, at the highest peak of her career, while being the most popular musician in Israel, decided bravely to go after her heart, leave everything behind and move to Los Angeles to start all over again as a rock singer. I painted her for a project about bullying and we had a deep heart to heart conversation where she shared how dangerous words can be, both to ourselves and to others and how it affected her career, powerful words a reoccurring theme in her music as well. It made me think about the world today and how we feel we can say anything hurtful behind a screen and a keyboard, without caring at all that words have meaning.

Narcos actor Alejandro Edda is a friend starring in a short film, El Bus, a story of a family man who gives up on life. Not being present for my children is one of my biggest fears so the story and Alejandro’s acting fascinated me. I documented him for a full week while working on set in Mexico City. I took a photo of Alejandro on set while working on the character of Uriel and then painted the portrait. I’m now working on an exhibition of “incomplete” portraits that this painting is a part of. The show will be held at Ouro studio in L.A. and then will be taken nationally and internationally.

Civil War was made for an L.A. charity, political event and auction in 2017. The organizers asked that I paint someone from the Civil War. I admired Lincoln for his ability to see the future. I believe Lincoln was ahead of his time. The painting sold for 40K at the auction and all proceeds went to charity. 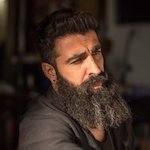 Tomer Peretz is represented by Giancarlo Pedrazzi at Fabbrica Eos Gallery in Milan, Italy. In 2014, Peretz’s art was showcased at Art Basel, Miami. In 2015, he showed at the L.A. Art Show. In December 2019, Peretz painted the logo for the Venice California-based film company, Concordia Studio, which is featured at the beginning of each of their movies. To see more of his work, visit his site.