I hear you before I see you. I start working on arranging my face.

There’s the ding-ding of the elevator, the door opening, your father’s voice.

Your father is a good husband. He visits me every day, except once in a while he doesn’t come. On those days, the elevator doors open, and it isn’t him, and they open a while later and I can smell the supper cart and I know for sure he’s not coming. Those are hard days. But they’re rare.

On the day you come, I hear your father explaining that you mustn’t let the residents out, some of them have bracelets that will set off alarms, but Mother’s doesn’t. I hear “mm-hm” and “okay,” and I think it’s your sister’s voice, which is confusing because I didn’t think it was Sunday. Your father again, heartily greeting staff, “Well, hello, Darlene, it’s nice to see you!” I know they’re smiling. Sometimes they joke with me about not telling him what just happened, as if I could if I wanted to. But they like him. Are any of them plotting to replace me? Ha! I can’t see him playing around. It’s been such a long haul with me, why in the world would he. . .

“Your mother is right over there, in the recliner, holding the doll,” I hear him say. “Brown recliner.” He said Mother, but your sister always comes after they’ve wheeled me over to the dining area for supper.

And then, there it is, this time unmistakably . . . your voice. Not your sister’s after all. “Hi, Mom,” you call as you stride toward me. “We drove in yesterday. It’s so good to see you!”

It’s good to see, hear, touch you too. A shadow over the chair, a light kiss on my cheek. I look up, ashamed of my tears. Too many emotions, all at once, and my face is caught in limbo. What expression does one put on for the daughter who was gone, who was missed—now that she’s here?

I know I have taught you not to swear, but where the hell have you been?

I want to know everything that has happened to you. Is everything okay?

I have so much to tell you, all the things I’ve thought of since your last visit.

All of this, duking it out in my throat. I know my face is blank. It looks like I don’t feel anything. That’s because I suddenly feel everything, the way all the colors of light blend together and what you get is a blazing glare of white. 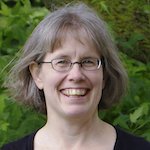 Anne Holzman is a freelance writer, mainly of journalism, published regularly in the Park Bugle and Korean Quarterly. She holds an MFA in Writing from Hamline University. She lives with her husband and three teenage children in Bloomington, Minn. Find her on twitter, @anneholzman.

One thought on “Self, Expression by Anne Holzman”