My attention often falls on things that just happen to be right where they are, set down here or there, together with this or that, thoughtlessly, as we say. These are gatherings of things I happen to have, that have caught my eye and been brought home, that friends and family have given me because they knew I would like them. They smile in anticipation of my delight. All of this is still life, occasions between plans, purposes, habits, and obligations, objects out of use, in the spaces between the times of our lives. These objects are usually common-place, and they can’t have the resonance for everyone they have for me, but they deserve the presence Cezanne tried to give his apples. What matters, and what I would like to make it possible for viewers of my paintings to see, is their place and the light they share, and share with us all.

A friend, a dinner guest, out of the blue, now some years ago, brought me a Japanese glass net float, and I have been painting globes ever since. Circles and spheres have their own seamless connections to the great order of the world and to the universe of universes, but in the tradition of still-life they are bubbles. Still life has for centuries been about vanity, emptiness, evanescence, coming to be and passing away. Fools blowing bubbles in medieval tapestries tell us that “Man is a bubble.” Chardin’s Enlightenment children build houses of cards, and they blow bubbles.

Oil painting was invented to paint light. The invention has long been attributed to Jan van Eyck and his brother Hubert. Nothing in a painting can be brighter than the brightest white, to which everything else must be relative.  Oil paint is translucent, and glazes of color gleam over a white ground.

Some of my paintings have bars of color. The most assertive example of this is A Lesser Net of Indra. A “net of Indra” is a curtain of jewels, all of which reflect one another, just as everything in light reflects everything else in light. In this painting, a band of repeating still life, shining and sparkling as things do, tops a large field of cadmium vermillion. The task for me was to make the still life as vivid as the red surface below it, that is, as vivid as the color of the field of red in the light shared with the viewer.

I sometimes have the notion that if I find the light I see in the colors I use—the palette changes a little through the years, but has been fairly constant—then what I have painted will look as if made of light. Then there would be little difference between an onion and its reflection, as in the Four Onions for C.W., or the Second Pitcher of Baubles.

My Sunny Studio Still Life (above) and everything in it would be sunlight. In Nothing but Light the light is natural, and different colors drift away from the window, toward invisibility.

Some paintings have titles from the beginning (Still Life with Sunrise, because of the surprising glow of the red), sometimes they have a number of titles as they shape up, or get a title at the end, or escape a title altogether.

A Bowl of Light has its title because you can’t put light in a bowl. Still Life with Silver Bowl and Blue Shadow is its titled because the silver bowl vanishes into the Islamic pattern around it, while a shadow demands attention. Paintings are made of paint, which are mostly metals and earths, but Titanium, Cobalt, etc. reminds the viewer that it is hard not to see silver and crystal in light when you look at this crusty arrangement of metals and earths.

We have all become accustomed to the word xenophobia, fear of strangers. The ancient term for still life, however, was xenia, and the paintings represented one of the rituals of hospitality. You might include a plate of fruit in the quarters of your visitors. Whether or not a still life is edible, it can still be welcoming, pleasant to see, even beautiful.

Super Happy Still Life is one of a series of larger paintings with the word “happy” in their titles. This one is “superhappy” because it is orange and flowery. The gazing ball sees much more than you do. Squash are not empty, but full and nourishing; gourds, if small, are always brash and busy.

To me, painting is seeing, acknowledging and imagining the distance of what I see. That distance is not space, but light. The more I see something or someone, the more I realize how much I did not see when I just looked.   Sometimes the shallow space of a table takes on a new order, as if a Mondrian had become a crystal. 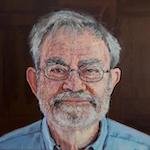 David Summers is Kenan Professor Emeritus in the History of Art at the University of Virginia. He received his B.A from Brown University in 1963 and his PhD from Yale in 1969. He is the author of Michelangelo and the Language of Art (1981), The Judgment of Sense, (1987), Real Spaces. World Art History and the Rise of Western Modernism (2003), and Vision, Reflection, and Desire in Western Painting (2007). He began as a painter, and has continued to paint and exhibit throughout his career, including a show at the Getty Research Institute in 1999. He was elected to the American Academy of Arts and Sciences as an art historian and painter is 1996.

One thought on “Nothing but Light: Works by David Summers”