On a windy day in December, just after the sun had set, I stepped out to go to the grocery store for milk. The wind whipped my hair across my glasses, and I didn’t see the uneven sidewalk by the Greek restaurant. It wasn’t icy but I fell anyway.

The sidewalk smacked my chin hard, and I bled all over my delicate silk scarf. A gold crown rolled out onto the sidewalk. Someone was making moaning, animal sounds and that someone was me. My spectacles dug into my cheek, the concrete pushing them past their plasticky limit. It was so cold that I felt numb until I got home, but then I cried. Sobbing, I rinsed out my gauzy scarf (the sink went red like a horror movie), frowned at my tearstained face in the mirror, and laid a bandage on my oozing chin. I had to hold the dog at bay all night from licking my face.

I was alone in New York. My husband had decamped to Hawaii with my daughter, who was out of school a week before me. I’m in college as a very mature student. I’m fifty-five and I’m pretty sure I’m the oldest one there.

The good news was my jaw didn’t break. I’m lucky, right? When something bad happens we always rush to make ourselves lucky. The crown and glasses were easily replaced, if you call getting a root canal easy. The event made me feel old, and I crept around like the old, old person my fellow students view me as. I slept for a couple of days after handing in final assignments, exhausted, bruised, my ego more than anything else.

Oh, the humiliation of falling! I felt like a complete dope. I also felt, foolishly, like no one cared about me, that I was alone and somehow that had contributed to this occurrence. I was vulnerable to the lurking sidewalk anomaly. It saw me coming from a mile away! If my husband hadn’t gone off to entertain our seventeen-year-old in a tropical location, this whole thing could’ve been avoided. “Watch out!” they would’ve yelled in slow motion, and I would have lifted my boot clear of the whole affair.

I hate when random accidents point out that we have no control over our fate. The sidewalk told me I’m human after all. I have a gold crown in my jewelry box to remember how I fell on my face, how I was all alone, and how that dumb dog showed me she loves me more than anyone else, as if that was ever in doubt.

For the most part physical pain is the pain of others, in my experience. Pain that fills up your senses and you can’t imagine ever ending, that blinds you to the external world like black smoke filling up your eyes—I’ve only had once, when I had a late miscarriage. At twenty weeks my water broke, an event that cannot be undone. When I went into labor, the pain felt like my stomach was trying to strangle me from inside. I delivered the baby stillborn and lost a lot of blood but unbelievably, the next day, felt no pain at all. It was over—the physical part. The loss of that ferociously wanted baby I’ll never recover from. He would’ve played hockey like his father, he would be in high school now, he would have his own children now. That pain radiates out; it will until I die.

Because of the baby, the most frequent pain I experience is fear of loss. That’s my highly tuned agony of choice. Unfortunately my younger daughter has asthma. “You might grow out of it,” people always said to her before she hit puberty, but she went the other way. Her asthma has become more severe, and we’ve rushed many times to the hospital for intervention. I can feel pretty sorry for myself in those times: panicked and hanging on my daughter’s every gasp.

But the emergency room reminds me of the many, many ways people suffer on this earth. The last time we visited, we were ushered into green seats in the waiting room, a privilege of the most dire. Next to us, the bleeders: a carpenter who had sawn off the fingers of his left hand and a soccer player pressing a blood-soaked rag to her ear.

Across from us, in the blue chairs, a man sat with another ear problem. A spider had crawled into his ear and became trapped when it bit the flesh and swelled the ear opening shut. The man could still feel the spider crawling around. He sat like that for hours.

We went through the swinging doors and took a bed. The nurse fitted my daughter with a mask that filled up with medicated steam. This was to coax open her bloody-minded lungs. A woman lay on a gurney, and my daughter scoffed at her being there—all she did was fall down! But the woman knew that falling down can mean falling down dead when you’re in your eighties.

We faced a little girl who looked perfectly formed. Her veins wouldn’t accept an IV, and the nurse had to poke her again and again. This girl was the sickest of them all. She transferred to a hospital in the big city for her invisible affliction. Her cries pierced the air but I remained dry-eyed. Through all the pain around me, I kept it together; I kept calm for my daughter. Her asthma worsens with anxiety. I shifted my gaze to the mother of the little girl. That’s when I fell down—fell apart. I could see the fear in her eyes. My daughter and I walked out of that place, but that mother’s eyes will haunt me. 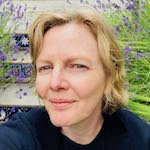 Celia Meade is a writer and painter from Salt Spring Island, Canada. Her work has appeared in Brushfire, Euphony, Plainsongs, The Louisville Review, Perceptions Magazine, Whistling Shade, and Sheila-na-gig. She is currently a MFA student at Sarah Lawrence College in New York, under the guide of Marie Howe.

One thought on “Falling Down by Celia Meade”