The summer I worked as a tour guide at the CN Tower, it was the tallest free-standing structure in the world. One thousand, eight hundred and fifteen feet tall.

On my first day there, I shadowed a colleague as he delivered the elevator speech I’d soon be memorizing—perfectly timed for the fifty-eight second ride. Halfway through, a blonde woman knelt by the boy at her side and gestured toward my colleague with a snarky smile.

“You see,” she interrupted. “This is why you stay in school.”

My colleague gaped at her while the rest of the guests studied their feet, and then somehow managed to resume his speech. The woman’s satisfaction was palpable.

I quickly learned that there was something about visiting the Tower that unleashed inner bullies like salivating dogs. Smiles were pointier and laced with disdain. “So is this your big plan for the rest of your life?” “You needed what, like a kindergarten diploma to get this job?”

I  started to feel sick on my way to work just as I’d felt sick on my way to school in fifth grade, anticipating mockery for my “welfare glasses” or my crooked teeth. The insults were different but the intent was the same. Bullies, I knew, were a lot like flies. You could never chart their flight plan, where they picked up shit, or where they would smear it next.

I cut my summer at the Tower short so my adventure-driven boyfriend and I could take a road trip—all the way to the island gem I’d idealized through Anne of Green Gables. By the time we entered the gift shop in Cavendish, the nation’s tiniest province had met my expectations. Countryside heaven and friendly stranger banter at every turn.

“We used to live in Ontario”, the shop owner told me when she learned where I was from. “But our son was bullied so badly that we decided to pack our bags and move out here.”

Bullies are everywhere, I wanted to say. I smiled politely and bought a snow globe.

Maybe it was the coziness of the rosy sand or the red-gold hue of the sun-lit sandstone, but later that day on Cavendish beach, I felt myself wondering if perhaps it was true. That maybe this place really was different, insulated somehow from—

“Oh shit!” my boyfriend cried, breaking my reverie. He was fumbling with his camera as a gull down the beach engaged in a violent attack on a crab. The flipped crustacean’s claws curled helplessly as stab after pointed beak stab rained down on its body.

“Oh, come on, honey bunch”, he said as he zoomed in on the action. “It’s dog eat dog! Enjoy it. We don’t have gulls like these at home!”

I never returned to work at the CN Tower, but I’d often pass it on my way to other jobs. It dwarfed me still, as it always would, and it made me think of those two little boys—the one who was bullied and the one whose mother bullied—and I wished all three of us could have stood as tall. 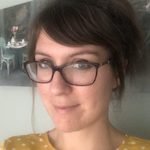 Andrea Lynn Koohi is a writer from Toronto, Canada, with work appearing in The Maine Review, Pithead Chapel, mac(ro)mic, and Emerge Literary Journal. Find her on Twitter @AndreaKoohi.