I was thirteen when I told my dad that I wanted to learn how to make his special potato salad. He grinned and handed me a knife and a five-pound bag of russet potatoes. “Peel these, and then chop ‘em into small pieces.” He filled a large pot with water and set it on the table. “As you chop the taters, put them in the pot. You don’t want them to turn brown.” It seemed like it took forever to peel the potatoes, my hands shriveling from the juice. I wore a callus on my index finger, and I had a few tiny nicks on my hands from the serrated knife edge. All the while, my father helped me peel and chop; he looked like a professional chef, and he was even smiling and whistling as I tried my best not to puncture any major arteries.

After we set the potato pot on the stove to boil, my dad had me count out half a dozen eggs and put them in a smaller pot. “Add a dash of salt before you put them on the stove,” he said, watching me like a hawk. “Let the eggs boil for about fifteen minutes. The potatoes should boil for about half an hour.” In the meantime, my dad instructed me to wipe down the table and wash the dishes we had dirtied so far. “If you clean as you go, you won’t have as big a mess after dinner.”

When the eggs were hard-boiled, my dad transferred them to a strainer and doused them with cold water so we wouldn’t burn our hands when we peeled them. Once no shells remained, dad put the eggs on a plate and handed them to me. “The key here, Baby Jean, is to chop as much as you can. You want the yolk to be like powder, and the whites to be as small as possible.“ With the knife in hand again, I was a ninja, slicing each egg and then chop-chopping them into oblivion. Still, that wasn’t good enough, as my dad kept telling me to chop smaller and faster. We didn’t have air conditioning, the heat adding to my frustration. Finally, my dad patiently took over the chopping while I checked on the potatoes. I watched as my dad sprinkled a bit of black pepper over the eggs, and then together we drained the water from the potatoes.

After my dad finished mixing the final ingredients and a few shakes of salt with the potatoes and eggs, we gave it a taste test before covering the bowl in foil and moving on to the rest of the meal. “You see, B., “my dad said, “the key is timing everything perfectly so that each dish is still warm when we all sit down to dinner.” While the potato salad cooled, we fried the chicken, made the shells and cheese, and baked the biscuits. And of course, we washed the dishes as we went along.

As with most teenagers, when I was in high school, I thought I knew everything. One day, I told my dad that I was ready to make the potato salad by myself. (Although, if memory serves, my dad may have helped with the peeling of the potatoes.) I put on the green and white striped apron I had sewn in home economics class and turned on the little radio cassette player. I was probably dancing to a Motown classic or singing along with some depressing Seattle grunge tune. Before I knew it, there was smoke everywhere and the kitchen reeked. I ran to the stove to find a big pot with mushy, blackened potatoes stuck to the bottom. The water had completely boiled out, and now there would be no salad. I was in tears when my dad came back to the kitchen. He looked at the pot and said it would be ok. “Next time, pay more attention to what you’re doing. And use more water.”  I smiled. At least we still had boiled eggs.

Write it down and save it.

When I was a senior in college, I had to write a final paper for a women’s studies course. Actually, it was more like a thesis. We had to take five or six recipes of foods that held significant meaning to us and write an essay for each one. Some foods and their meanings were easy to identify—the pound cake that my babysitter Vada made when I was a kid, or the cocktail I invented with my friends to cure the boredom of spending Spring Break at home. But a few required me to ask my dad for help.

My father had been in ill health throughout my entire college career. In fact, he had a heart attack when I was home for Thanksgiving during my freshman year, and then had bypass surgery a few days before Christmas. I would call my dad every Sunday afternoon or evening, when I knew he would be home after church. When I called to ask for his help with my paper, you could feel the excitement on the other end of the phone. For over an hour, he walked me step-by-step through how to make his potato salad. And his Brunswick stew. Every non-scientific unit of measure (a pinch, a dash, a little spoon, a big spoon). I wrote it all down with pencil and paper, including side notes on when to wash what knife or plate so it could be used again later in the recipe. I could imagine my dad smiling and counting on his fingers as he went through each minute detail. He had been disappointed that he couldn’t contribute much to my education financially, but I don’t think he realized how much he gave where it counted.

I had typed the first fifteen pages of my paper without saving when the power flickered, and my screen went black. “NOOOOOOOO!”, I screamed in the highest pitch I could register. My roommate rushed in to see what was wrong.  Thankfully, his study partner was there and knew how recover my lost work. See, pay attention to detail.

“Hudy Salad”, coined from my dad’s childhood nickname, became legendary among my post-college friends. I made it for every backyard barbeque or potluck dinner. My roommate Calvin was especially fond of it, and since he was one of my best friends, I trusted him with the recipe. He was going to a picnic lunch and wanted to impress his friends. When I came home from work that day, I asked how the potato salad turned out. “Not so good,” he said with a frown. I went to the fridge and found the problem. Instead of using Duke’s mayonnaise and French’s mustard like I had emphasized, he used the store brand. Much like toilet paper and feminine products, there are just some things that are too important to use generic.

Of all the lessons I learned from my father, the most important is that the kitchen isn’t just a woman’s place. The second is that a meal is best enjoyed in the company of others. Over the years, my friends and I have shared many prized recipes with one another, from Calvin’s grandma’s mac and cheese, to my best friend Liz’s mother’s chicken pot pie. I have made my own tweak to each dish, using a different kind of cheese or substituting jars of gravy for cans of condensed soup. But the feeling I get when cooking and eating them is still the same—the pride of creating something that I can enjoy with others.

Food is social lubricant, but it can also comfort us when we cannot be together. During the pandemic, social media has been flooded with pictures of folks making their own bread, soups, and desserts. It has been a time of harnessing our self-reliance while creatively staving off isolation, virtually inviting friends into our homes to share a meal while distancing. And what is the first thing that most people plan to do post-Covid, what makes them excited about getting the vaccine? Enjoying a meal out with their friends.

Food is edible history. A smell or taste can hold memory. My father died nearly fifteen years ago, but every time I make his potato salad for Easter lunch or Fourth of July, it’s like he is there with me. He’s the angel on my shoulder, smiling and telling me I need to chop the eggs a little finer.

*I have given you all the ingredients for Hudy Salad, except for the one that gives it that special kick. Perhaps one day we will be good enough friends for me to let you in on the secret. 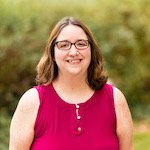 Betty J. Wilkins is originally from Martinsville, Va. She graduated from Virginia Tech in 2001 with a BA in Communication. Although she has been writing since the age of seven, this is Betty’s first widely published work. When she is not busy being a word nerd, Betty enjoys going to movies, concerts, and dinner with friends. She is a proud cat mom to her calico, Chloe. Betty currently lives in Christiansburg, Va. and works in higher education.