I moved to Southern California in 1962 from central California. The first wildfire I remember was in 1967 and started near the Chatsworth Reservoir. My girlfriend was up there with a boy (we were sixteen) after telling her Mom she was spending the night with me. They barely made it out alive.

In 1970 the Chatsworth to the Sea fire burned thirty-two miles from the Santa Susanna Pass to the Pacific ocean in Malibu. Friends lost their homes and art studios.

When the Mandeville Canyon Fire burned twenty homes in 1978, I was living in Santa Monica and working in Brentwood at an art supply and frame store. A number of our customers lost their homes and one I remembered saved most of her art collection by throwing it in the swimming pool as she was evacuating. The view from my apartment looking past Santa Monica, which appeared to be in flames, was my first fire painting.

Then things got real up close and personal. While driving my children up Old Topanga Canyon Road to school they commented on the hot temperatures and forty MPH winds, saying, “Mommy aren’t these fire conditions?” They were indeed and an hour later I was the last car to get through the canyon to pick them up on the coast. There was one way out and they had only ten minutes to evacuate before the fire descended on their school.

2009 brought the Station and Jesusita fires. A group of local artists formed a fundraising association called Art From The Ashes. We went to the fire sites and collected debris, used it to make art which we then exhibited and sold to raise funds which were used to rehabilitate the sites. (find attached a few of those pieces).

In 2017 the Thomas fire descended on old town Ventura, City Hall and the Mission. It burned back into Ojai and destroyed homes and $171 million in agricultural farms.

I was inspired to paint a piece on wood framed by burned wood I recovered from an incinerated greenhouse. At this point I became interested in the abstract and primal nature of fire. It’s structure and color and energy fascinated me.

Thursday November 8, 2018 at 3 p.m. I walked out of my art classroom headed for home and was greeted by the specter of a massive black smoke cloud and the unmistakable smell of a brushfire. Already at that hour road closures prevented many of my colleagues from returning home.

At 2 a.m. Friday morning I was awakened by a call from the Los Angeles County Sheriff. “This is an emergency immediately prepare to evacuate!” I was told at this point there was only one way out. I began methodically loading my car. Important paperwork and medications were the obvious firsts. An earthquake kit was already in my car. Favorite family photographs were next. Then my paints and brushes. It would be impossible to take my life’s work so I chose one personal painting and carefully wrapped and loaded some of my favorite pieces of other people’s artwork.

Finally I grabbed my grandmother’s kimono and my cowboy boots. Might as well go out in style.

My school district closed for six school days, many of my students and their families were left homeless. A friend evacuated from Topanga Canyon stayed with me for a week while we watched the holocaust and waited to see when it would end and if we would have to move in with other friends.

When I got the notice to prepare to evacuate I knew I would do a series of semi abstract artworks based on fire. Thus: Fuego inspired by the awe striking power and beauty of California brush fires. 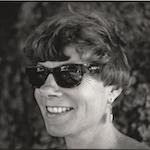 Lynn Coleman is a California artist who has been in over 300 local, national, and international exhibitions. She is in the permanent collection of the National Gallery, the Laguna Museum, the Orange County Museum of art and the Los Angeles County Art Museum. She currently maintains a studio in the San Fernando Valley. Coleman was the only female contributor to Thrasher Comics. Her art has been featured in mainstream publications such as Esquire, Beach Culture, the New York Times, and Surfer’s Journal.