I wasn’t going to make it. I’d made a mistake; this whole stupid backpacking thing was a mistake. I trudged a step further. A young guy, about thirteen, with Keanu Reeves hair and an Osprey backpack loosely perched on his shoulders made eye contact with me. He winked, gave me the “we’re in this together” nod, and flashed a peace sign as he loped past. I looked away, crushed.

It’s almost funny now, how I gave up not even fifteen minutes into a three-week backpacking trip. I mean, in redemption stories, the part where the cool kid shows solidarity is exactly when one is supposed to overcome adversity. The heroine finds her strength and straightens her back, determined to march up those damned switchbacks and hike five miles longer than initially intended. Later she’ll say, I didn’t know I had it in me, or I knew it was there all along. It’s the moment that defines her. “My life was changed forever,” our fierce protagonist will tell her Instagram friends and YouTube fans.

Obviously, that’s not this story.

That morning, many people had already assembled at Happy Isles, also the beginning of the John Muir Trail. They milled about with focused energy, applying sunscreen, refolding their visitor maps, taking pictures, flexing muscles, generally looking relaxed and at ease with the world. Several skinny, outdoorsy, bright-and-shiny synthetically adorned backpackers tossed quizzical glances my direction, probably wondering what she was doing out here, in their recreational playground. I’d hoped to lessen those occasions where I’d be scrutinized and hop on the trail before anyone would have time to realize I didn’t belong.

My husband Aaron and I started along the trail, which seemed flat enough. That quickly changed as sudden, steep switchbacks cut up the hill toward a scenic waterfall overlook. With each step, my heavy pack pulled me backward. The broad hip belt dug into my stomach, emphasizing all my flabby parts like a popped open cylinder of biscuits. My heart thumped in my ears, and I instantly began heaving, sucking in air as best I could. Dozens of tourists passed me, jauntily heading down the switchbacks easy-breezy.

Cue the hot, flushed cheeks. Cue the tears. Cue young Keanu, with the kind of healthy optimism only afforded to those whose bodies and brains have yet to fail them. And cue me, with my notoriously rebellious body, inadequate coping mechanisms, and an uncanny knack for failure. I wanted to disappear.

We fought our way back to Happy Isles, threw our gear in the car, and drove over to the Yosemite grocery store, not happy at all. Aaron could barely look at me. I knew how it seemed to him. I’d talked him into it. I’d convinced him to spend money on it, take time off work for it, and even worse, to believe in it. I’d been the one so certain we could hike 225 miles with hardly any training and no backpacking experience.

People do it all the time, I’d endlessly maintained.

You can barely leave the house, he’d retort.

He headed in while I scrunched against the passenger seat. My chest felt like it’d been cracked open by lightning and a headache relentlessly pounded over my left eyebrow. I sank deeper into the pit of my stomach, where there was never a shortage of despair. Down there in the murk, there was no surprise, not really.

Aaron came back to the car with a small red package in his hand. “It’s kinda crazy they sell these here at Yosemite,” he said, unwrapping the lid and pulling out a cigarette. He handed one to me and pulled out another for him.

We lit up, watching as aggressive squirrels tried to steal food from families. Birds pecked at empty pizza boxes hastily left on tables. Gangs of lean young men pulled out maps and prepared for adventure. Were any of them about to do the JMT? I wondered, flicking ashes into a water bottle.

In 2005, the year we tried to hike the John Muir Trail and failed, I was twenty-nine and had smoked consistently since sixteen, having had my first cigarette at twelve. I figured since we were going to try the whole backpacking thing, it was time to quit. For real. Before shit got real.

Our trip was set for August, and we quit around April. In the middle of July, Aaron offered me the perfect opportunity to backslide. He’d been working fifteen-hour days on a movie set at the San Jose State campus. All the standing around and watching other people have productive, meaningful lives filled with productive, meaningful smoke breaks finally got to him. He came home one evening and stood in the entryway, eyes down.

“I smoked a cigarette at work today,” he confessed.

“You what?” I glared at him while my heart jumped with delight. Yes! It wasn’t me! I wasn’t the first to cave!

“Well, you better go right back out there and buy a pack of smokes, buddy. ‘Cause if you got to have one, then I do, too. Them’s the rules.”

“This is our last cigarette, right? For real?”

And every morning, we bought another pack.

Our irregular training sessions, which amounted to thirty-minute neighborhood walks around West San Jose, slipped into infrequent discussions about the possibility of exercising. Finally, the whole notion of training died, as we needed all our spare moments to smoke and drink coffee. Things were falling apart, but in the form of bad habits we were familiar with and comforted by, so we hadn’t yet recognized the impending collapse.

Somehow amid all my fears and avoidances of our trip, I still managed to scrounge up our gear. I purchased packs. I bought twenty-one days of food for two and sent resupply boxes to the appropriate places. I found a trail guide, including an itinerary, which I poured over endlessly. It had the trail broken down to between ten- to sixteen- mile days, mileage that seemed doable to me, even though I’d never walked over seven miles before.

I planned and prepped and prepped and planned, but I couldn’t train, couldn’t face the trail or my anxiety directly. We were two days away, and a frank discussion about expectations versus reality would’ve been an excellent topic to explore. Instead, I distracted us by demanding we watch the entire second season of 24 on DVD. We smoked our way through Jack Bauer’s endless obsession with “just trying to be a family again.” As we neared twenty-four hours without sleep, I sent Aaron out for more cigarettes, Sausage McMuffins, Venti coffees, and the next season of 24. It was 6 a.m., and we were supposed to leave for Yosemite.

“We have until 4 p.m. to pick up our permits,” I mumbled from my cocoon on the couch. “So, we don’t actually have to leave until noon.”

Aaron was torn. I could sense him preparing to fight me. I brought out the big guns.

“This is our last hurrah, Aaron. After today, no more smoking, no more stuffing our faces. We’re gonna be in the backcountry for three weeks. A 100 percent clean slate.”

He was skeptical. “But aren’t we just making the trip miser—”

“Look,” I interrupted. “I don’t want to do this anymore. I want things to be different. I’m going to try, I promise. I want to go out there and kick ass.”

“But first,” I said, “We have to have one more pack—one more. We’ll smoke our last cigarette at that pretty vista before the Yosemite entrance. We’ll say goodbye.”

We pulled up at the vista around 3:30 p.m., delirious from lack of sleep, sick from too much McDonalds, dizzy from chain-smoking and coffee. I lit our last two cigarettes. Issac Brock’s neurotic voice sang to us while we looked over the expansive reach of green hills dotted with lava rocks and prickly shrubs. To the left, a rocky, windy river slinked in and out of view. To the right, my redemption story awaited. Soon we’d walk our way through the Sierra Nevada, and all these hurt, destructive versions of me would finally fall away. They’d end up footnotes, anecdotes to help contrast a life of failure to my impending success. Soon I’d trace the character arc of my memories, and find the highlighted trail, the one leading to a worthy me, had been there all along. Just waiting to be realized into existence. I put out my cigarette and grinned into the future. 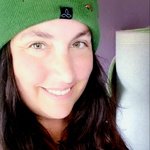 Amy Bee contributes to the Sacramento News & Review and Good Times Santa Cruz. Her work has appeared in the Atticus Review, Ozy, Salon, New Ohio Review, the London Reader, and others. Her essay, “The Adult Section”, won the 2017 Sunlight Press Summer Creative Nonfiction Award. She’s currently working on a memoir about failing at what you love and loving what you’re not good at. When she isn’t writing, Amy likes to backpack long distances. Follow her on Instagram:_amy_bee.