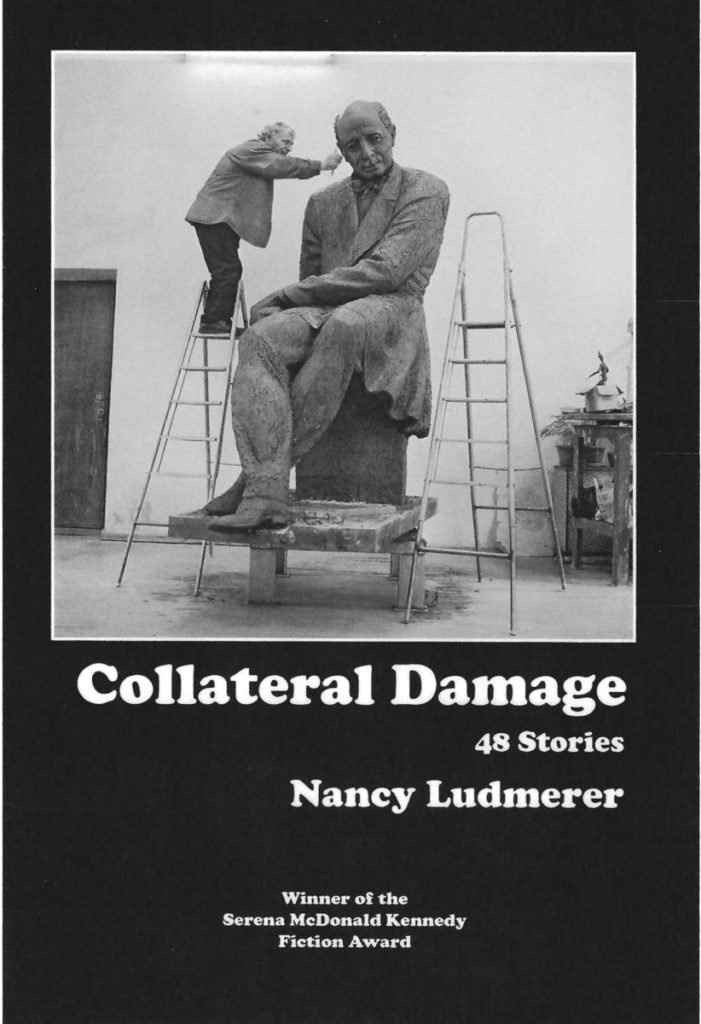 Collateral Damage: 48 Stories, the title of Nancy Ludmerer’s debut collection of captivating short stories, invites threat and suspense, but her sterling craft and literary sensibilities upend all expectations. The collateral part is clear, if often subtle; the damage comes from uncommon revelations, each convincing, each a wonderment.

I held my breath (and laughed) for the celebrant in the propulsive and detailed single-sentence flash fiction, Bar Mitzvah, when he choked on his piece of celery “stuffed with scallion cream cheese”; delighted in the guileless turnaround in the page-long Tiffy; and admired the imaginative conceit in the longer A Bohemian Memoir, told from the vantage point of a slightly-chipped, proud-to-serve roseate and gilded goblet, whose gentle pride falls prey to tradition and practicality.

The author divides her collection into two parts: Collateral Damage and In the Repair Shop, inviting the reader to believe whatever damages occur in the first section may be fixed in the second. I am not sure this was intended, but what I do know is that I trust this author through every comma, mood, setting and character.

Ludmerer’s language is idiomatic, protean, and often evokes laughter through the voices and circumstances of her characters. Emotions are rarely stormy and loud, rather introspective, enlightening and nuanced. Touching, dignified, silent: all describe the attempted exculpation for euthanizing a cat in The Decision. In Learning to Dive in Bonaire, a novice scuba diver enters an intimately quiet underwater relationship with both her teacher and a boy who has drowned, understanding that both are beyond reach.

Some stories, like There I Will Take Your Hand, reveal damage done slowly and inexorably, as the author guides the reader to an organic empathy. Not all emotions are so tempered. Rage, the narrator’s and this reader’s, rushes in with the murderous tide in the eponymous St. Malo when a woman, to escape her unpleasant companion, walks to the sea flats where she watches an older man wheel an invalid woman further out on the deceptively dry expanse. The narrator becomes aware of water pooling at her feet, recognizes the tide roaring in, and sees the ocean begin to lap around the couple. She cries for her companion to help and witnesses as he and the man pick up the woman and her sea-sogged blanket and run her to safety, while her companion yells to the narrator to rescue the abandoned and impossibly heavy wheelchair. In retelling the story, the man will position himself as the savior. As I write, I remain in a fury, revisiting the scenario and its injustice, a kudo to the author.

Adventureland is another story that evokes fury at collateral damage. A thirty-seven-year-old divorcée, Celia, succumbs to the literal warmth of a stranger who lends her a sweater during an outdoor performance of the admirably and ironically chosen As You Like It in Central Park. It turns out the handsome man, Clay, is “rolling in it,” a promise of financial and personal relief. Months later, Clay, Celia and her four-year-old son Nicky, are leaving a weekend in Montauk when Clay insists they stop at an amusement park for Nicky to experience a ride on the Spinning Dinghies, a ride Clay’s own two boys loved when they were Nicky’s age. Nicky, it turns out, is too short and too young to go on the ride, but Clay’s $50 bill buys out of the rules and Nicky embarks. Ludmerer’s description of the child’s increasing panic and unhappiness is epic, as is the brilliant slow-motion dénouement of Celia’s future.

Laugh-out-loud stories include In Memory of Maisie, a funeral disrupted by a disgruntled friend who has not forgiven the deceased for taking, not borrowing, her Aloe Vera cream, and who cries, “Where do you think those soft cheeks came from?” It is worth reading the entire collection for the last sentence of that story.

Yet another story, Breakfast with Henry, is reminiscent of screenplays about unintended guardians of developmentally-challenged relatives who, nevertheless, make life whole and sane. Here, the reversal of expectations leaves us reeling—and joyful.

In each story, it is Ludmerer’s characters who decide/clarify/instruct/nudge us through the power of their histories, accents, tastes—from music to food—ironies and improbabilities (though never implausibilities). It is the characters who make us turn pages with a sense of wonder and a marrow-deep thank you for what they reveal to us about our humanity.

Nancy Ludmerer’s fiction appears or is forthcoming in Kenyon Review, Electric Literature, New Orleans Review, Best Small Fictions 2016 and 2022, Best Spiritual Literature 2022, Litro, and other journals. Her fiction has been translated into Spanish and read aloud on public radio, and since 2020, her stories have won prizes from Masters Review, Carve, Pulp Literature, Streetlight, Gemini, and Orison Books. Her short memoir “Kritios Boy” (Literal Latte) was cited in Best American Essays 2014. Nancy practiced law in NYC for many years and continues to live there with her husband Malcolm and thirteen-year-old cat, Joey. Follow her on Twitter: @nludmerer. 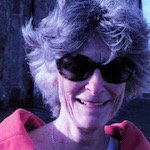 Of Brazilian-Chilean-French origins, fluent in four languages, and a traveler to the seven continents with her husband and three children, Denise Dailey adapts easily to international subjects. Her ability to listen to people in multiple languages, and her passion to share their stories inform and propel most of her writing, from short stories and fables to her travel journal, Listening to Pakistan: A Woman’s Voice in a Veiled Land (2011), her award-winning biographical novel, Riko: Seductions of an Artist (2018), named one of that year’s best reads by Kirkus’s starred review, and her most recent book, a memoir, Leaving Guanabara (2019).