August 10, as my friend, Wikipedia, tells me, what is often called (by historians and other interested parties)  “the Second Revolution” occurred in France, when the mob stormed the Tuileries Palace, effectively deposing 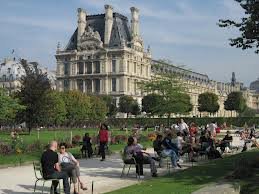 King Louis XVI, in 1792. Unlike Bastille Day, it is not a day marked with celebration and felicitation, but it certainly was important. Especially to 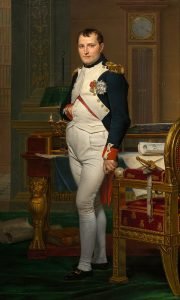 Napoleon Bonaparte, who, through a concatenation of events, not least of which the deposing of the king, became First Consul in 1799 and Emperor in 1804. The third chapter of that story (or is the fourth or fifth?) is the restoration of the  monarchy in 1814 so it had to be done all over again in 1848. That time — having learned from history?– the king, Louis Phillipe, was wise enough to abdicate. And so, Democracy marched on. A bit chastened perhaps, which may be why they celebrate the fall of the Bastille, but Tuileries, not so much.

Among other things, it was a bloody affair on both sides, especially for 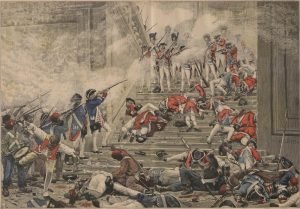 the defending Swiss Guard, of whom hundreds were killed, including, of course, the king and queen, though not on that day. And from that time forward, things got dicier and dicier in the new Republic.

France was at war with Germany at the time and the king was evidently standing in the way of some hoped-for strategy. At is turned out, deposing him didn’t help anyway. The Germans advanced. Thus, the rise of Napoleon — not to mention the Reign of Terror. But lets not mention the Reign of Terror. It must have been exhausting to be in France in those days. Nonetheless. it being August, and not much else going on, here’s a good day to remember some things. 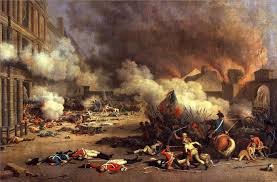 One, it’s not easy to get rid of kings when they resist going. And two, it’s not easy to hang on to Democracy, even when it’s been established with fine words and strong sentiment. Did they know that? Bigger question, do we? We don’t have any kings, but the Napoleons are always waiting in the wings. So, fire up the barbecue and raise the toast, Vive La Revolution, and long live Democracy. Happy Tuileries Day.