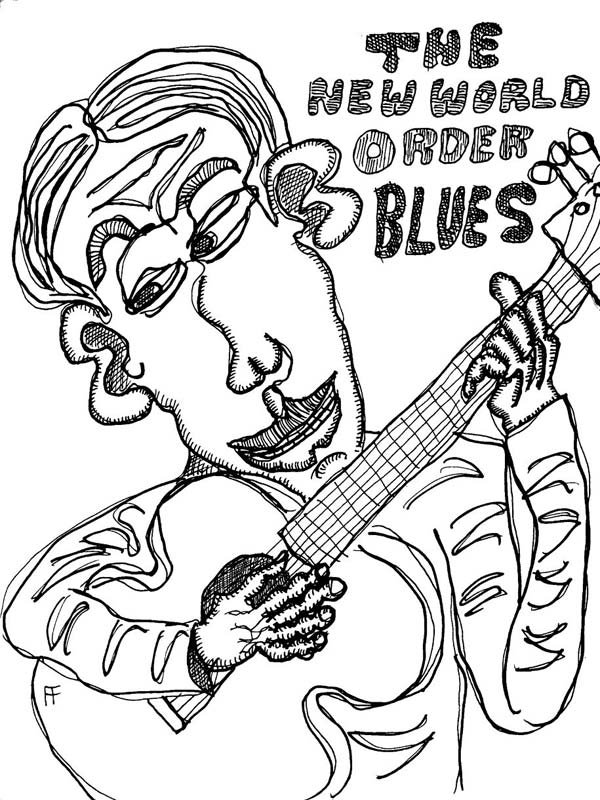 The New World Order Blues is inspired by the late conspiracy researcher and radio personality Mae Brussell, updated for today’s concerns and presented in one of the greatest music styles ever created by Americans—Black Americans: The Blues.

Listening to Mae’s weekly radio show, World Watchers was like getting a re-education in history of the 20th Century. She uncovered many well-kept secrets we were not supposed to know. The Military Intelligence Industrial Complex was her turf and each week, from a radio station in Carmel, California, she took the lid off the conspiracy machine so we could peek inside and see how it worked.

Besides Mae, there was another influence and the predecessor for the NWO Blues, an artistic one: the Blues Folks series, ink drawings on paper employing a very loose, characterization style. I found a bunch of old blues performers’ photos and made liberal interpretations of them. I love wild and free drawing styles. As the years go by I make it a goal to employ more of this caricature expressionism in my work.

I used an old photo of blues-man Charlie Jordan as a model for this drawing. The characterization draws on many art styles from Pablo Picasso to Robert Crumb.

These pieces show a more somber tone. A lone fiddle plays a rendition of his heartfelt blues. The heavy black areas help bring this mood across. Blues singer John Lee Hooker has a reflective moment and again the dark tones help anchor his mood.

For Son House, I use the dark tones, but the style is less realistic, making it more whimsical.

Here I combined the fine line and deep blacks to give a strong impression of the banjo player’s prowess.

A double line technique: one fine, the other medium in thickness adds to the overall texture of the graphic. The eye registers two lines which makes it more stimulating for the viewer.

For me, art is about feeling and what each person feels for a particular image will be different depending on their personal experience.

Allen Forrest is a writer and graphic artist for covers and illustrations in literary publications, among them The McGuffin, Cincinnati Review, Straylight, Folio, Ragazine, Perversion Magazine, Jokes Review, Under The Gum Tree, Paper Nautilis. His book covers include Damsel in Distress by P.G. Wodehouse, A Very Angry Baby Anthology and Hamburgers and Berliners by Matt Potter, the 2015 winner of the Leslie Jacoby Honor for Art at San Jose State University’s Reed Magazine. His Bel Red landscape paintings are part of the Bellevue College Foundation’s permanent art collection in Bellevue, WA. Forrest lives in Vancouver, BC, Canada.