I was persuaded, if not coerced, to join a group therapy session. My boss was concerned about my mental well-being. I panic when I have to speak in a setting with more than two other people. I rarely utter a word during meetings unless obliged to give a report or am asked a question. On these occasions, I flush bright red from my face down to my neck and chest. I jumble words. My discomfort is highly visible and audible. It was the Human Resources therapist/social worker, part-time hire to do assessments and recommendations for employees in psychic angst, who proposed group therapy. Group Therapy! A room full of strangers discussing personal traumas. I flushed at the mere thought. He insisted, in that pseudo soft voice that bad therapists adopt, he insisted the experience would be helpful to overcome my shyness in public. The group he proposed was small and intimate. Sessions took place in the therapist’s apartment. Cozy, non-threatening environment, he assured me.

The sessions were run by Olga. She emailed me the rules beforehand. Never arrive late. Never arrive more than five minutes early. Shoes off by the door. No food or drink, not even water. No socializing with any member of the group. Should you happen to run into one of them, do not engage in any discussion beyond the weather. In fact, do not discuss anything that goes on in the group with anyone. That would dilute The Process. Never reveal the circumstances under which you came to know the group member.

Olga’s apartment is lush, creamy, and overstuffed. She is an ample tall blonde of an equally ample age she would probably not admit to. She’s swathed in a flowing beige tunic and is fully shod (albeit in elegant slippers) unlike us barefoot or sock-wearing damaged creatures. She sits in a high-backed armchair, turned away from the big windows giving out onto a park in full foliage. We penitents sit on metal folding chairs semi-circling out from her throne. The hour is one that many people consider dinner time. Olga is one of them. A tray with a full platter of sushi is on her lap. She chopsticks each morsel and dips it liberally in a dish of soy sauce. At intervals she sips from a mug that one would assume contained tea although, with Olga, no rules seem to apply.

Joan talks about a recent blind date. She was excited to meet the man mainly because, like her, he is a vegetarian. “Not easy to find,” she says.

“I blew it,” she moans. “I told him I had been a member of a Buddhist group for twenty years. He got up and left and that’s the last I heard of him.”

Silence. Not one of stillness and calm. Not speechless shock. A silence of uncertainty, of waiting, that becomes a form of torture. I hear someone speak. It’s my voice. I am the one speaking.

“I don’t think you blew it. Saying you belong to a Buddhist group is part of who you are. Nothing to be sorry for.”

Olga swallows her morsel of sushi and asks me, “How do you feel, Janet, saying that?”

“Not what you think, Janet. What do you feel?”

“I felt badly for Joan since nobody was saying anything.”

“And how do you feel, Joan, having Janet say what she just said?”

“Not think, Joan, do you feel that Janet cares?”

Olga looks around the room. “What does anyone else feel about what Janet said to Joan?”

“Aha!” exclaims Olga waving her chopsticks in the air. “Now we’re getting somewhere. Getting to something neither Janet or Joan can admit.”

“I thought, that is, I felt, I was trying to make Joan feel better,” I say.

“You were being superior, Janet. You made her feel worse.”

“Oh, you will,” says Olga as she pinches another piece of sushi.

My folding chair clangs as I get up to leave. I smile at Joan, grab my shoes by the door, and wait outside for a while on the chance Joan will follow. She does not. I can only hope she hasn’t started to feel worse. 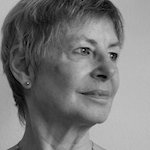 A former professor of art history who has lived many years in several countries, Julia Ballerini is now settled in Manhattan where she is devoted full time to writing fiction. Many of her stories address old age and understandings and misunderstandings across generations and cultures. Connect at juliaballerini.com, @BalleriniJuli and on Facebook: julia.ballerini.3.