On a warm winter day when I was five or six, I knelt on a bench in Central Park and watched as water ran down behind a sheath of ice on the face of a granite boulder. Some ten years later in Ivy, Va., my sister had left her watercolors and paper on our sun porch. I had never painted before, but I suddenly felt an overwhelming desire to paint the trees outside the window. Those two episodes, clearly remembered, framed the beginning of my painting life.

From then on, I began to paint the streams, hills and fields near my home. My motives were more visceral than intellectual. I wanted to reproduce what I saw. Fishing and hunting were favorite pastimes and gave me a source of constant imagery. Changing weather was a regular part of my outdoor life and a steady influence.

The artists who inform my work would include the Hudson River School, John Singer Sargent, J.M.W. Turner and Winslow Homer. My visits to the Metropolitan Museum, were, and continue to be, a constant, energizing force.

While my first paintings were watercolors, I came to enjoy the physical properties of oil painting and the leeway the medium made possible.

My friend, the late New York painter Robert Kulicke, said, “sometimes I paint better than I know.” Those are satisfying moments. Painting is not always a choice. Sometimes it can take over.

I think I’ve always painted for the same early reasons. I found the natural world a constant miracle and wanted to give the passing visual moments a kind of permanency. 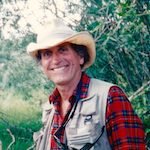 John Winship Howard, a graduate of Yale University, is co-founder of the Tandem Friends School in Charlottesville, Va. He has shown his work in Princeton, N.J., Key West, Fla., and various Virginia venues.

4 thoughts on “Rivers and Streams: Paintings by John Howard”