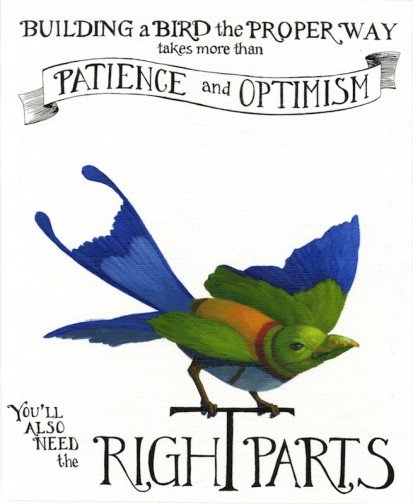 Artist Kate Samworth did, in fact, imagine such a future world and came up with her own creative solution. In Aviary Wonders Inc., Samworth offers environmentalists and bird lovers of all ages, a mail order “catalog” from which to choose a colorful array of anatomy parts to assemble into unique and beautiful birds. Readers also can teach their fledglings to fly and choose the perfect chirps, whistles and trills for their flights. 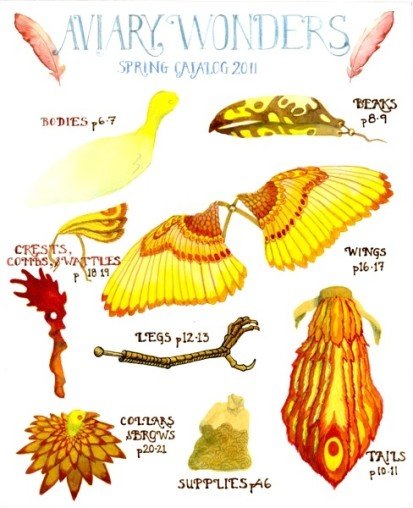 Set in 2031, Aviary Wonders Inc. warns of the world’s decline in birds, telling the story of Alfred Wallis who goes to Brazil to scout new forests for his family’s logging company and there confronts the devastating loss of bird species and habitats. He determines to repopulate the world’s birds, founding a company to maufacture parts for rejuvenation, the result a dizzying display of bird possibilities and the claim of “Renewing the World’s Bird Supply Since 2013.” 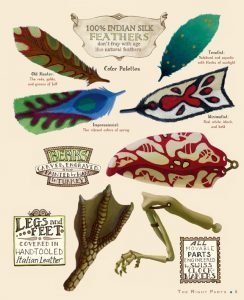 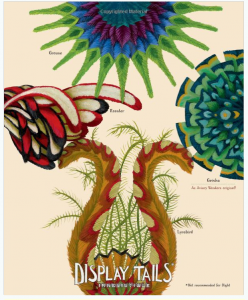 Delightfully illustrated in oil, ink, graphite and colored pencil, Samworth’s imaginative, informative, wry and often sly concept, won the new and esteemed Kirkus Prize for young readers’ literature in 2014. Kirkus judges praised Samworth’s presentation of “environmental issues in a clever and whimsical way,” finding the book “original, highly unexpected, beautiful, and thought-provoking. ‘Aviary Wonders Inc.’ is by far one of the most creative books we have ever encountered.” 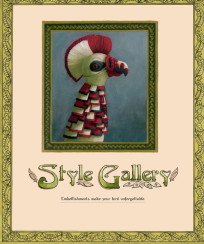 Samworth’s stunning first book was, in fact, inspired by a strong environmental consciousness nurtured by her parents, her father, a civil engineer interested in water and energy issues, and an artist mother who led camping and bird watching expeditions. Kate discovered her particular ardor for birdwatching on her own extended trek to Brazil. “I camped in the national park and saw many wonderful birds that had a strong impact on me.”

She was further moved by grief when hearing the story of a couple returning home to New Orleans after hurricane Katrina to find “it eerily quiet” from the distressing loss of regional birds. Kate had only recently left Louisiana after studying painting and drawing, and teaching at the New Orleans Academy of Fine Arts.

“I lived near a rookery and every night would go and watch snowy egrets in the trees,” she remembers. “Hundreds of birds would cover the trees. It was a magical sight.

“I was depressed thinking of the lost of so many birds, and I drew a ‘catalog’ cover for a bird company to conserve our resources. I was trying to cope with the grief of New Orleans and the catalog became an art project. I didn’t intend a book much less a children’s book.”

By then, Samworth was studying printmaking at the Pennsylvania Academy of Fine Arts where she would receive her BFA. An admired professor encouraged Kate to develop her idea into a larger format and consider children’s book illustration. Aviary Wonders Inc. Spring Catalog and Instruction Manual would take nine years to complete. 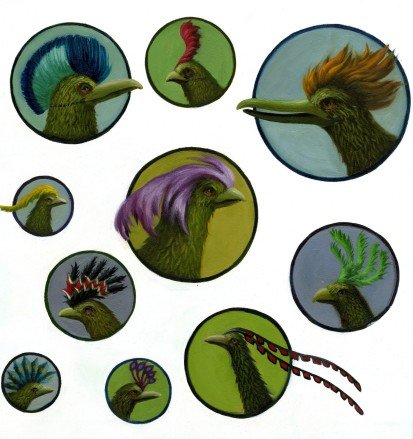 Whether creating for children or adults, Samworth’s love of birds remains a fanciful constant; they appear to dramatic effect in her narrative paintings and drawings, symbols of both hope and fear for the changing, natural world. “We have, for centuries, ascribed human traits particularly to birds. We guess at their inner thoughts. They constantly evolve; they often represent peace and convey a sense of the divine, but we cannot communicate with them no matter how we may wish to.”

The series Outskirts of Catatonia,” “was created in response to a friend’s diagnosis of mental illness. During this period, she found it difficult to communicate. There’s a sense of struggle and isolation, and birds symbolize spirit and secret communication.

“In the Tyvekia series, I was reacting to urban sprawl, deforestation changes in the Maryland landscape where we used to be able to camp. Now we see huge homes and subdivisions in all directions.” Samworth further portrays her sense of adventure, whimsy and environmental concern by lifting known figures from famous paintings and placing them in iconic art works by the likes of Van Gogh, Magritte and Velazquez.

“I wanted to put recognizable figures in new, different positions and see how they would react — time travelers moving from painting to painting to show how our relationship to nature is changing.”

Velazquez’s Las Meninas (The Maids of Honor) appear in an idealized garden as well as in a Magritte dreamscape where Samworth says, “they found they could defy gravity in a fanstasy. I took off their hoop skirts so they could move around more easily. It was a practical decision.”

She notes that naturalist, geologist and 18th century painter Charles Wilson Peale, a pre-enlightenment Christian, was among the first to foresee extinct species. As an admirer of Peale’s early dedication to preserving nature, Samworth’s rich scenario paintings have Peale inhabit a lush Eden flourishing with animals, fish and fowl.

Samworth is particularly attracted to the drawings and paintings of birds made by early explorers of the Amazon and the American frontier. She also looks to many artists for instruction: Sargent for light, Ingres for technical skills, Rembrandt for realistic technique, Eugene Carrier for psychology and darker moods. “I’m especially interested in an artist’s story-telling qualities. I saw Bosch as a teenager and I wanted to be an artist.”

A professional artist for more than 20 years, Samworth’s work has been exhibited from Los Angeles to Cambridge Massachusetts, New Orleans to Washington, D.C. The former resident of Stanardsville, VA will show “Blackberry Ramble: The Adventures of Charles Wilson Peale” at the Olin Hall Gallery of Roanoke College VA in the fall of 2015. She will participate in the Princeton, New Jersey Children’s Book Festival in September.

In the meantime, Samworth, a fan of Roald Dahl’s Charlie and the Chocolate Factory, continues work on new illustrations and her second children’s book, the story of a young girl discovering art.

Ideally, says Kate, picture books appeal to both children and adults, and at their finest, are considered “art books for adults.” 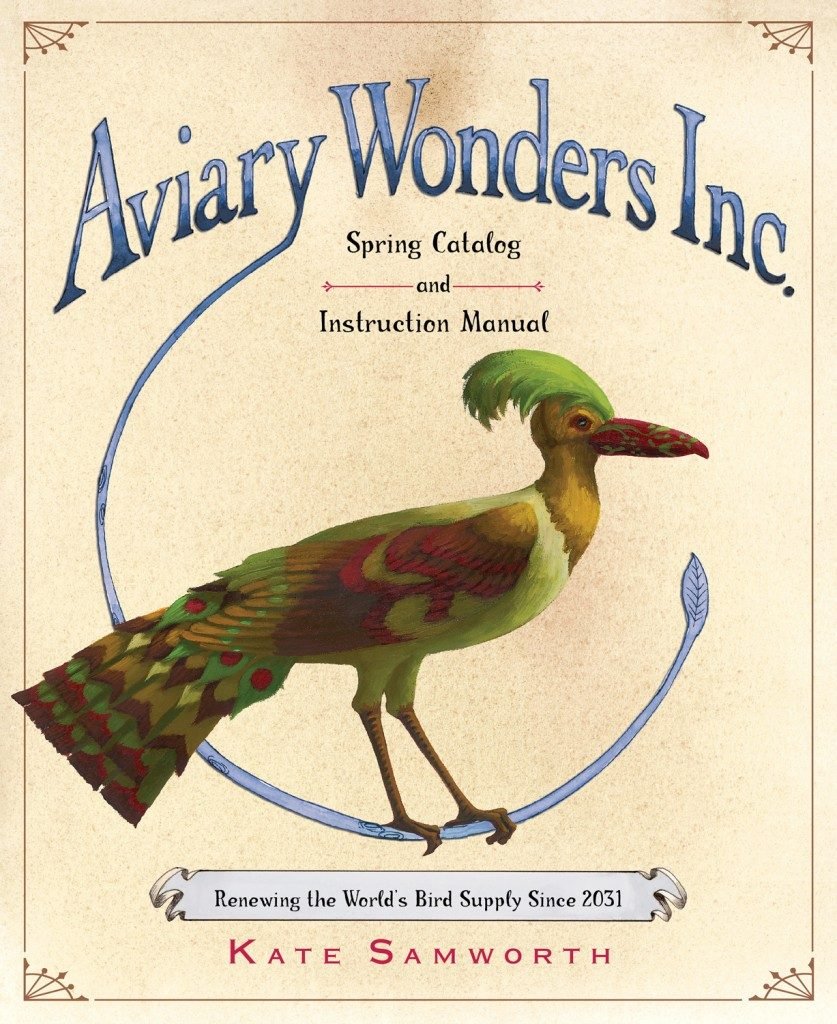 “Contemporary painter Auseklis Ozols describes art as a balance between technical ability, aesthetic decisions, and emotional content. In my opinion, any picture which exhibits these qualities is “fine” art, regardless of the surface that it is painted or printed on. Illustration, whether created for children or adults, has the potential to reflect and interpret the world, to raise questions, and to re-present the familiar. Ultimately, isn’t that the purpose of art?”

Visit katesamworth.com to enjoy more of Samworth’s art. She teaches at the Washington Drawing Center and lives in Takoma Park, Maryland with her husband, Chris Weybright, a woodworker.

More of Samworth’s art appears in a related Streetlight blog, The Art of Illustration.