One evening, damp and full of anguish, I arrive at a camp and basically fall apart. I want to talk to my boyfriend back home, but as usual have no signal. I start climbing on soggy leaves, moving higher, hoping. Finally, a few circles fill in on my screen and I call. His voice is like a hug, but as soon as we start speaking the raindrops start up again. Reluctantly I let him go and trudge downhill to the shelter, set up for the night.

In an iPhone advertisement from when FaceTime was new, a woman lies in a hotel bed, a phone on the pillow beside her. Its screen frames a man, smiling and speaking. Intimacy is the obvious point. Thanks to technology, the ad promises, time apart is tolerable. In the wet woods, 650 trail miles from home, I know this promise is true. A photo from a friend back home got me through twelve grim, frigid miles today.

Before I tried to hike the entire Appalachian Trail, I did my homework. I researched gear and bought the right equipment. I practiced throwing a line to hang a food bag out of bears’ reach. I dehydrated fruits and veggies, read memoirs, and devoured blogs. I day hiked. I shelter-slept on a 15-degree night. To protect my knees, I lost body weight. By cutting the handle off my toothbrush, I saved pack weight. All of this was invaluable.

But I’d have traded any of it for one clean fact I learned on the trail: For anything approaching reliable signal coverage, you need Verizon. I had AT&T.

Before my hiatus from modern life, I relished the idea of digital disconnection. Like many of us, I blamed a fusillade of social-media fueled dopamine hits for clipping my attention span and cluttering my mind. When I did get away from my phone—for a run or a yoga session—my calm was palpable. The peace only amplified during longer periods of disconnection, on ten-to-twelve-mile day hikes, for instance. Surely, months in the woods would yield a device-free nirvana. To conserve battery but still use the camera and GPS, I’d keep my phone on airplane mode. I’d check in with home only at night. I tried to imagine what sort of schemes and ideas this minimalism would lead to, and it seemed the sky would be the limit. I would come back from my adventure with an infinite attention span and a clear-eyed plan for the rest of my life.

These days, it’s popular and understandable to malign the digital device. Who, today, would admit to NOT trying to cut back on screen time? All of us though, are working uphill here. An article in The Atlantic recently described just how insidiously social media and other apps are designed to exploit the principles of behavioral psychology. “The attention economy, which showers profits on companies that seize our focus, has kicked off what [Tristan] Harris calls a ‘race to the bottom of the brain stem.’” Because social media apps take advantage of a powerful reward system that gives us pleasure intermittently but unpredictably, it’s hard to fight the urge to check. You never know when you’ll get a goody, so you frequently feel, and sometimes fight, the impulse to find out.

Out on the trail, released from such tyranny, I do, of course, have hours of calm and peace—many, many sets of hours of calm and peace which can at least partly be attributed to my inability to check. On balance, though, I’ll admit that cutting the digital “cord” was among the harder challenges I’ve faced in life.

During one of the bleaker stretches of my journey, I posted blog entries describing my struggles, and some friends, full of good intention, suggested that being “less connected” might help. Their thinking seemed similar to mine before I left home. They probably believed that by using my device less to reach my off-trail world and life, I could more fully embrace and engage with my on-trail world and life. Isn’t the whole purpose of backpacking to connect with yourself, to go inward, to immerse yourself in the natural world? All totally true.

And all totally unavoidable. There’s no way you’re going to walk for weeks in the woods without disconnecting. You get hours of alone time every day. “Try being less connected.” Are you out of your mind? Lonesomeness in the woods eclipses lonesomeness in any other circumstance I can imagine, save perhaps outer space. I turned my phone off airplane mode at the end of each day and waited, prayed for the dots to fill. Mostly, what I saw instead was No service. Never before or since have I felt such isolation and grief.

But what about meeting actual humans on the trail? Isn’t that better than burying your nose in a phone? Yes and no. Yes, you meet many people—many people who are genuinely wonderful. And you might fall in with a bubble and stay with these friends until the end. But no matter how tight a bond you form, they are still essentially new people, and if you don’t fall into a bubble (I didn’t), the people around you will be constantly shifting as you leapfrog each other up the path. To be sure, when signal paucity forces everyone into the present, magic happens. You get to know people you otherwise wouldn’t.

Isn’t that worth the tradeoff? I don’t know. Maybe a twenty-minute Google Hangout with my boyfriend would mean more. Maybe I’d rather spend thirty minutes scrolling Facebook, lightly touching the lives of a lot of people I love. There’s no danger of developing device addiction in the woods because your access is achingly infrequent.

But, okay, okay. Yes, there is one undeniable advantage to unplugging. It contributes to a trail phenomenon I’ve not seen named anywhere but which is ubiquitous: long-distance backpackers are mask free. The guard we erect in public spaces simply doesn’t withstand trail time; you’re too close to the edge, too focused on survival, to have energy left over for designing or deploying a persona. You simply are yourself; there’s no other option.

In off-trail life, devices are part of our guard. At a Starbucks, on a crowded subway, in a conference room with a few other people waiting for a meeting to start, or especially in an elevator with only one other person, our devices save us the energy of engagement. They buffer. On the trail, free from signal, we lose one chink in our ordinary armor, and, yes, it forces us together.

Okay, but still: who are we kidding when we disparage digital connection? Beyond temporary fasts and breaks, who among us truly disconnects? Not many. And is that a problem? No. It’s for a valid, legitimate reason. Constant and instant access to our loved ones is nothing short of marvelous! We take it for granted; we’ve forgotten that it’s wondrous.

Addiction, distraction, fasts, and breaks notwithstanding, we rely on the reality that if we want or need to, we can, in an instant, reach out to and connect with just about anyone we know. When we cannot do that? Not because of a self-imposed media diet or a spurt of phone-free productivity, but because we do not have service, WiFi, or battery? Very. different. story.

I’m aware, of course, that just fifteen years ago it was a regular state of affairs for a lot of us a lot of the time. Just fifty years ago it was the norm anytime you left your town, and a hundred years ago it was life, period, for everyone. But as with so much else, it’s the contrast to our new norm that makes departure from it remarkable. It isn’t a regular state of affairs now for us to be out of communication longer than it takes to ride an elevator to your floor or park your car in the underground garage. Liabilities of such constant contact exist, to be sure. Nevertheless, we are used to it. Removing it is nothing short of deprivation. Extroversion, introversion, whatever: A fundamental need we all have is to connect with other people. And no matter how inferior you believe a technology-mediated connection is to a flesh-and-blood one, it’s still superior to isolation.

Now that I’m home, people ask me, “What was the hardest thing about the hi—” and “loneliness” blurts out of my mouth before they finish the question. I was lonely to the point of desperation, to the point of fear.

I got off the trail because of a stress fracture, but I was struggling with other aspects of thru-hiking, and it’s not at all clear to me how far I would have made it even on a bone that wasn’t broken. I often wonder now what would have happened if I had had a good signal. 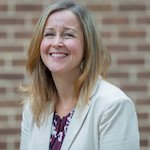 Mathina Calliope is a writer, teacher, editor, and writing coach living in Arlington, Virginia. Her work has appeared in the Washington Post Magazine and on NPR’s Morning Edition, The Manifest-Station, and Prevention.com. She is working on a memoir about quitting her job at 43 to hike the Appalachian Trail. A Dream To Disconnect originally ran on The Trek on January 17, 2017 as The Single Thing I Wish I’d Known on my Thru-Hike That Nobody Told Me. Read more at mathinacalliope.com.

2 thoughts on “A Dream To Disconnect, by Mathina Calliope”